The Baška area on the south-eastern part of the island is particular for some of its curiosities. When we climb from the Punat valley, and at a height of around 330 m, we pass through the Treskavac hills, surrounded by the highest hill on the island (Obzova, around 570 m) and we then suddenly find ourselves in front of the Baška hill-encircled valley, where we remain surprised, almost breathless. This is because we are not prepared for this kind of play on nature, the bond between the mountains and the sea.

The Croatian birth certificate – the Baška tablet was found in the village of Jurandvor in 1100. 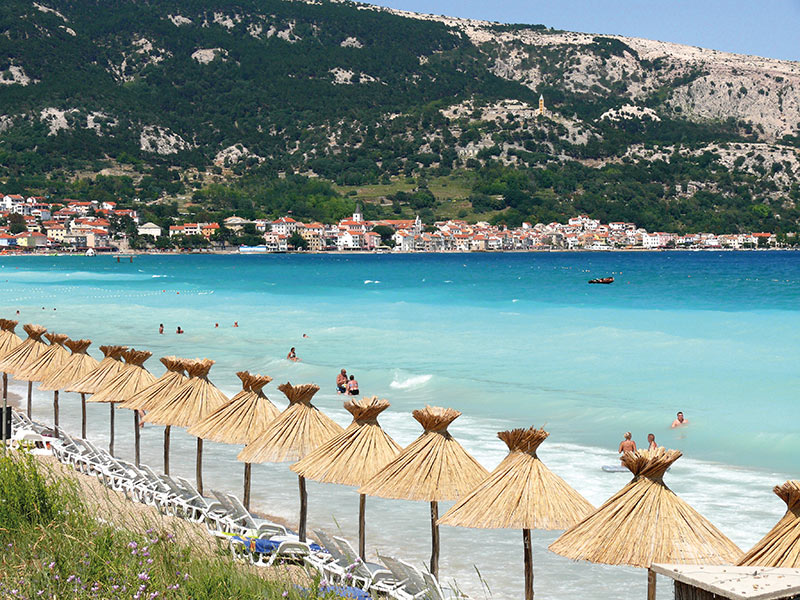 Baška is also recognizable as having one of the largest and most beautiful pebble beaches on the Adriatic, which is in a semicircle and more than 1800 metres long. The naturally fine sand provides, especially for children and non-swimmers, pleasure on the beach, as the sea level increases gradually.

Like other villages on the island of Krk, even this village’s old part contains the narrow streets and houses positioned one close to the other so that the atmosphere is typically Mediterranean.

Apart from its beautiful beach, Baška is also interesting for its characteristic architecture, numerous cultural and historical monuments and its surrounding tour paths. Baška is also recognizable for its high quality accommodation facilities, from hotels and camp-sites to private accommodation capacities.

The origins of tourism date back to the beginning of the 20th century, when, in 1904, the “City Embellishment Society” was founded. Two years later, the first hotel was opened and in 1908, the beach was laid out with its beach building. Its first guests were Czechs who remain faithful even today. These guests arrived thanks to Prague’s “National politics” director, Emil Geistlich, who was a great friend of the village and who spread the word about the beauty of this area. The people from Baška acknowledged him by erecting a monument close to the beach.